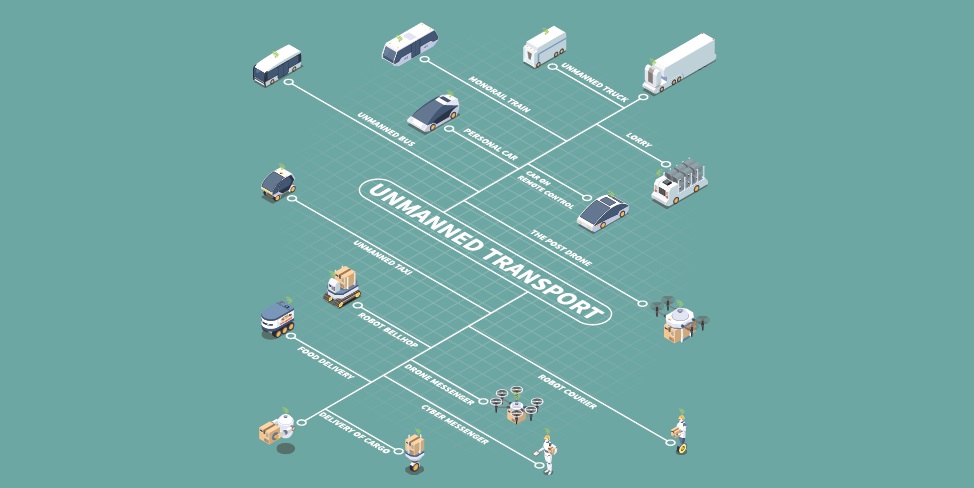 “Having grown up in a small town in rural America, I had a few friends who were farmers. When harvest time came around each year, I remember hearing about their fancy combines guided by GPS. “I just sit there in the air-conditioned cab and play on my phone while the combine goes back and forth across the field.” This was years ago, and a self-driving combine was a luxury since so much of their day-to-day work outside of this new machinery was arduous and difficult,” says Matthew Wittemeier, who is responsible for Marketing at INFORM’s Logistics Division.

The concept of autonomous drones, robots, and self-driving vehicles (SDVs) is now becoming commonplace. We’re now on the cusp of eliminating the cab and allowing the farmer to sit in front of a laptop, tablet, or even use their smartphone to direct the combine. That said, we’re about to see a drastic uptick in the amount of capital expenditure and implementation of drone, robotics, and SDV technology across the logistics industry.

Labour shortages, Amazon, luxury convenience, 5G technology, the last mile, and consumer demand for the free delivery of goods within hours are regular discussions across the logistics industry. Underpinning many of these discussions is also the broader Industry 4.0 one: the automation of services by robots and AI technologies. In 2017, INFORM put together a three-part blog series titled Drones, Robots and Self-driving vehicles: Reshaping the Logistics Industry which was also published in the 2018 book Exploring New Frontiers: Reshaping the Postal Industry.

Now, three years on from the first release of that series, we’ve taken the time to dust it off and look at what’s changed around these automated technologies and what the near future might look like for them. Again, for the sake of this discussion, we’ll continue to focus on three categories of automated vehicles: unmanned aerial vehicles (UAVs, aka drones), land-based small vehicles (robots), and automotive self-driving vehicles (SDV).

According to a study from PwC from 2017, the market for drone technology was estimated to reach $127 billion in 2020, not including military uses. Since this report was completed, we’ve seen the FAA continue to design regulations for Unmanned Traffic Management (UTM) and companies incorporate drones into their operations for their usability in numerous settings as a subsequent result of improvement in cameras, battery life, sensors, communication, and other component technologies. In a recent CBInsights report, the use of drones wasn’t limited to logistics providers either, with the list featuring names like Alphabet (Google), IBM, Apple, GE, and the BBC joining the likes of Amazon, FedEx, DHL, and UPS, just to name a few.

Among the logistics operators, Amazon is still the loudest drone advocate with tangible commercial services in place. In 2019, we saw Amazon deliver more packages via its Prime Air service. If you’re not familiar with Prime Air, it touts delivery in 30 minutes or less for packages weighing less than 2.25 kg (5 lbs.) and within a 24 km (15 mi) range of the Washington, D.C. area. In the same year, DHL announced its first fully-automated drone delivery service over the skies of Guangzhou, China. Finally, we covered that UPS trucks will become a mobile hub/landing pad for a counterpart drone to deliver lightweight packages in conjunction with routes to increase efficiency and capacity in our first version of this article two years ago. Since then, UPS has been the first logistics supplier to be fully approved for commercial drone delivery by the FAA in America.

Considering the added complication of flight, continuous innovations, developing FAA regulations, and implementation costs, drone technology is still progressing slowly. However, as companies continue to tighten their grip on the value and logistics of effectively utilising drones, we will begin to see more drones moving forward, and with such a broad spectrum of usage applications available, we’d argue that a future where drones are performing small- to medium-scale services, like package or pizza deliveries among others, is no longer a question of “if,” but rather a question of “when.”

Robots, on the other hand, seem to have proven themselves on multiple fronts over the past few years demonstrating far greater possibilities than their aerial counterparts. Since land-based robots are not constrained by the limitations of sustained flight and associated payload weight restrictions, their application areas are considerably broader. Labour shortages being experienced across the globe are also providing a major opportunity for implementing robotics of all shapes and sizes to support the manufacturing, order fulfillment, and warehouse operations of logistics providers around the globe – we’ll skip the Industry 4.0 (aka “Fourth Industrial Revolution”) lesson for now.

Since 2017, we’ve seen the development of 5G (high-speed, high-reliability, mobile networks) and SLAM technology along with increasingly sophisticated WMS and OMS (Warehouse and Order Management) systems. Robots can now co-op with human counterparts to support and optimise functions for order fulfillment and inventory management across a company’s manufacturing and distribution portfolio. The data bridge between consumer and retailer has now become seamless, which allows for orders coming in to be optimised and to reroute a robot’s path through the warehouse in real-time. In some cases, robots completely take over functions that humans used to complete or alert the human to the next pick (e.g., picking SKUs for order fulfillment, replenishment, etc.) which has allowed for more efficient use of warehouse space.

A few years ago, there was a lot of discussion around the elimination of jobs similar to the plight of John Henry (i.e., “man vs. machine”). However, robots seem to have become more of a sidekick filling in the gaps that were previously subject to human error. According to a study completed by the UC Berkeley Labour Centre, displacement of workers will vary across companies experimenting with robotics, but will not drastically impact the industry in the short- or medium-term. In fact, the robots may serve to intensify workers’ day-to-day activity since the robots will be optimising workers’ activities and routes in the warehouse to fulfill orders more efficiently, resulting in increased worker activity.

The study went on to say, “With continued growth in demand, aggregate employment levels in the warehousing industry will likely continue to…